22nd Street in Saskatoon bisects some of the poorest neighbouroods in the city, those that are the least likely to own cars and the most likely to walk or use transit. As discussed in Part 1 of our series 22nd is also among the most dangerous streets in the province, with double-digit pedestrian-car collisions resulting in injury or death in 2017 alone.

Knowing the vulnerable population that relies on this street for access to education, services, groceries, jobs and health care, what care does the city take to ensure safe and accessible conditions along this corridor? Let’s take a look.

The only grocery store in the area is on 22nd and Avenue W. To get there involves traversing streets that look like this:

It’s probably best to think of it like a video game when you are pushing a shopping cart full of groceries or a stroller down these streets. Make it fun for youself while you try to avoid slipping on the ice and snow into the street.

The city and media don’t like to acknowledge dangerous conditions for walkers on 22nd, perferring to repeatedly blame pedestrians for jaywalking even though the large majority of pedestrian-involved crashes on 22nd are the fault of the car driver.

However, even when a pedestrian crosses against the right of way can they really be blamed? Not only are the streets on 22nd by and large inaccessible due to snow, ice, dirt, dust, narrowness and lack of curb cuts but even an alternative route through parallel streets is full of dangers:

Saskatoon owes a basic right to its citizens of safe and accessible transportation. This is not happening right now where its needed most, and it’s a shameful and continuing failure of the whole city. 22nd street is dangerous by design and needs to be made safer immediately.

Continue on to our next post where we present immediate and desperately needed fixes to make 22nd Street safer for walkers.

While the city has embarked on a stakeholder engagement process to “Imagine Idylwyld” not much has been done to improve 22nd.

So what can we do to improve the notorious corridor? The city has been considering making changes to the stretch of road since prior to 2015. They have installed a couple of pedestrian activated traffic lights and have mused about several other interventions; some easy and inexpensive like desynchronizing lights or narrowing drive lanes and some more difficult/expensive/disruptive like installing fences or pedestrian overpasses.

Vision Zero suggest some fast fixes to improve places where drivers and people meet. Among them, there are several that stand out for 22nd Street.  Here are are our Vision Zero-inspired recommendations for starting to make 22nd Street safe and accesible for all road users:

Enforcing current traffic rules on speed, pedestrian right-of-way and red lights would make the street much safer and the fine money raised would be used to fund streetscape and safety improvements.

Vision Zero is much more than a few guidelines; It is a fundamental approach that many European and North American cities have adopted with great success. New York City has recently cut it’s pedestrian deaths by 32 percent through this approach.

Saskatoon has had Vision Zero on its radar since its strategic Traffic Safety Action Plan (TSAP) in 2013. It’s been almost five years without any significant commitments to follow through. It’s encouraging to note that two city councillors and Mayor Charlie Clark have confirmed via Twitter in early January that they “are seriously looking into Vision Zero”. Here’s hoping they put their words into action soon.

Thank you. We are seriously looking into Vision Zero for #yxe.

With the city currently engaged in planning for the future bus rapid transit along this corridor, along with the Transit Village near the Confederation Drive intersection and on the heels of the city’s “Imagine Idylwyld” stakeholder engagement and design, Saskatoon has a historic opportunity to re-imagine 22nd Street as a place for people – or at the very least a place where people can cross the street without fear. 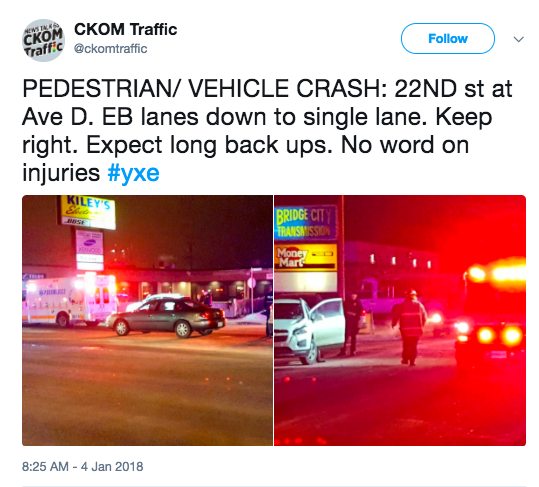 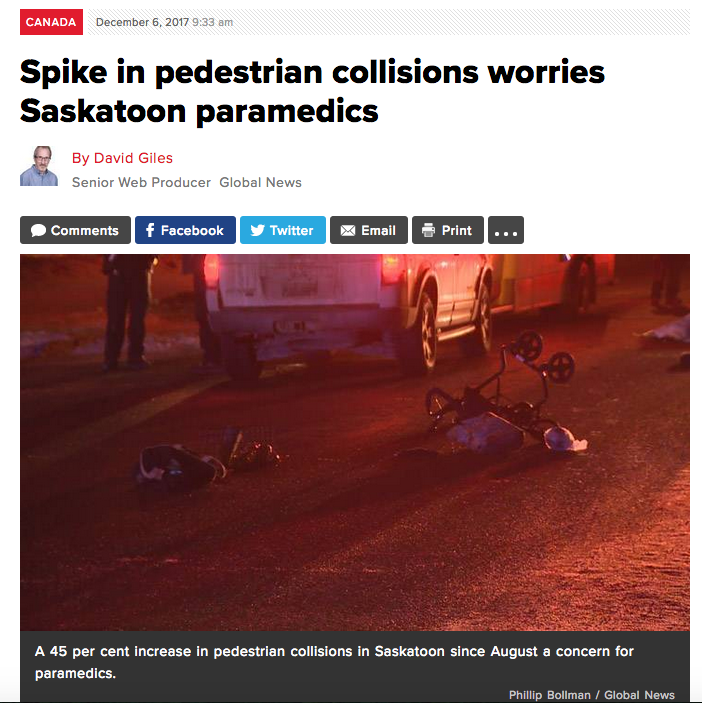