Warrick Baijius and Cam McMillan of Walking Saskatoon presented the proposal for widening the pedestrian pathway on the Sid Buckwold bridge to the city’s Standing Policy Committee on Transportation meeting on June 12th. The presentation was well received by the councillors and met with many positive comments. The committee voted to send the proposal to administration for a formal report on the costs and engineering details of the project. Walking Saskatoon will continue to keep on advocating for the widening right up until the work starts.

The event was well covered in the media, with Cam talking to CBC Radio about the project and both the Star Phoenix and the CBC covering our presentations (starts at 4:30).

Here’s a great one from @dragpokorlo who even got the Airport to respond:

The City Standing Policy Committee on Transportation meets on Monday at 2:00 in Council Chambers. Early on the agenda are Warrick Baijius and Cam McMillan from Walking Saskatoon giving a presentation on proposed upgrades to the Idylwyld Bridge walkway. Come down to the meeting to show your support or watch the livestream broadcast. 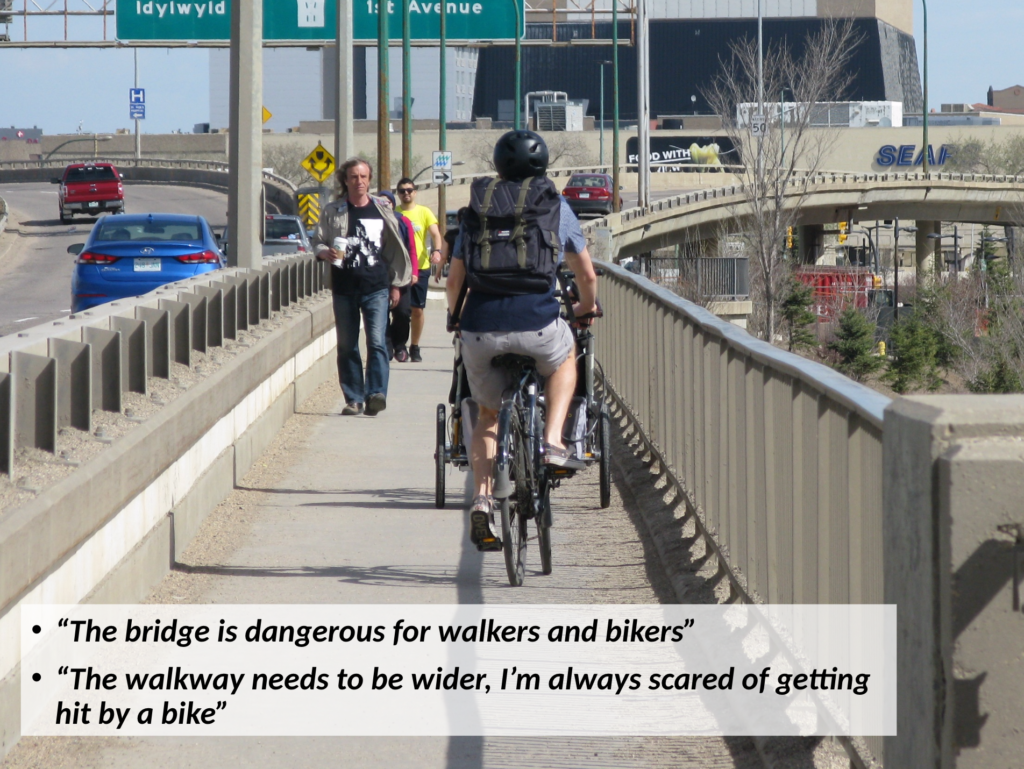 The following streets will get sidewalks this year where none existed before (as long as council agrees to spend already budgeted money):

Some very high-profile problem blocks will get much needed sidewalks:

Cumberland from 14th to Colony, a major thoroughfare for University commuters and home to a mud-and-snow-bound bus stop:

How about Clarence from Brand to Stonebridge Blvd? A new suburb designed to fix the mistakes of past neighbourhood efforts with regards to walkability but where they forgot to put sidewalks on many major roads?

As we discussed during last year’s release of the list the budget line item for sidewalk infill has no ongoing funding attached, but rather relies on year-to-year one-time allocations. Last year, red-light camera fine money was used. This year saw ten times the money spent ($2.3M vs $240k) as federal money from the Public Transit Infrastructure Fund was used this year.

This led to some changes for the criteria used to select streets to construct sidewalks on. Last year, there was a formula used that incorporated access to parks and schools. This year, access to bus stops was used as the primary criterion given the transit-focused funding source.

Next year, the fight for funding begins again. Walking Saskatoon will be heavily lobbying on the issue, as well as pushing for more transparency in the judging criteria and list of streets that are under consideration for sidewalk infill. However, this year is the most successful ever for infill sidewalk construction in city history and both council and administration are to be commended for their attention to this issue.

Many may have seen Streetsblog’s Sorriest Bus Stop in America contest. Given our city’s too-large collection of sidewalks that start and/or end nowhere in a similarly useless fashion to a bus stop on an Interstate, we are interested in your pictures of stranded sidewalks in Saskatoon. Use the hashtag #sidewhere and/or send it our way via Twitter or Facebook using the links at the left.